Welcome back, friends, to Crit the Books! This week, we’ll be discussing how power level in games can be measured. It isn’t always just whomever has the bigger numbers – there are a number of different ways to measure how “good” a specific model, strategy, team, or deck is. While many of these are often ignored or looked over, learning them can give you the edge in a number of matchups, and can help your overall play. Some of the metrics of power we’ll be looking at are raw numbers, interactivity, and number of options.

Raw numbers are pretty easy to figure out – this is the simplest way to measure how good something is, because it is very easy to measure these quantitative amounts. As a general rule, a model or card that has bigger effects is stronger. We’ll look at Magic: the Gathering for our example on this point. Let’s look at 2 different cards that share a number of qualities: Shock and Lightning Bolt. Almost every piece of rules text on these cards is the same – they are both instants, they both cost one red mana, and they both deal damage to a target. However, it is pretty obvious that Lightning Bolt is the more powerful card, since it deals 3 damage to Shock’s 2! 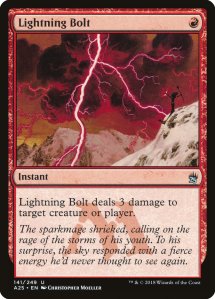 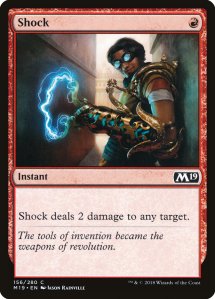 However, big numbers aren’t the only thing that shows the strength of a game’s elements. If you only look at how big something’s numbers are, it can become easy to forget another measure of power in games: efficiency. Let’s take a look back at our earlier example and compare Lightning Bolt to another spell: Flame Lash. Some players might look at these cards, and conclude that Flame Lash is better, because it deals 4 damage rather than 3. However, those players would often be mistaken! While there are situations where Flame Lash is more useful – such as, for example, against a creature with 4 toughness – you pay for those options in efficiency. While Lightning Bolt is an engine that lets you turn 1 card (the Lightning Bolt) and 1 mana into 3 damage, Flame Lash turns 1 card (again, the card itself) and 4 mana into 4 damage. While both spells take a single card to cast, Lightning Bolt beats Flame Lash on mana efficiency by a lot! Don’t let yourself get caught up in just those big numbers – you have to take efficiency into account as well.

While efficiency and raw output are pretty easy to give solid metrics to, there are other measures of power that are not as easy to quantify. This does not make them any less important or useful in judging the power of a game element. One of these measures is versatility, or how many options the element gives the player. While options themselves do not equate to power, many game elements trade off pure efficiency or numbers for different options, and that can make those elements powerful in more situations, increasing their overall power.

For our example on versatility and options, we’ll look back at Magic: the Gathering. This time, we’ll look at Turn // Burn. At first glance, Burn has the same base amount of damage as Shock, and has less efficiency. Rather than paying 1 mana for 2 damage, Burn asks you to instead pay 2 mana! This seems like just worse Shock, right? Wrong! Turn // Burn is considered a stronger card by a number of magic players, and that is largely because it gives you more options than Shock does. If you’re facing down a 3 toughness creature, Shock isn’t going to help you very much. Turn // Burn, on the other hand, can allow you to answer that creature by playing both sides of it together. While neither Turn nor Burn has very strong base output or great efficiency, together they can be very strong and give you answers to a number of different situations. 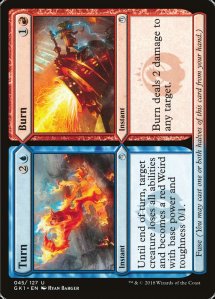 Before we finish up, let’s look at another one of the often forgotten measures of power: Interactivity. Put simply, this is how difficult it is for your opponent to try and stop your game elements from being effective. If a piece cannot be interacted with easily or stopped by your opponent, it is generally more powerful than another piece with similar power or efficiency. The less time you give your opponent to respond to your actions, and the fewer ways your opponent has to do so, the more powerful your game will be.

Let’s do this by comparing Shock to Falkenrath Reaver. Both of these cards have similar damage output if you look at them on a per turn basis, since the Reaver will deal 2 damage on each attack. While at first glance it might look like the Reaver has a lower efficiency, since it costs 2 mana, you’d be mistaken! In the absence of any interaction from your opponent, the Reaver can continue to attack each turn, giving it theoretically infinite efficiency! Reaver certainly has more options that it provides to its controller than Shock does – Reaver can block opposing creatures, and will even destroy ones with 2 toughness, just like Shock! 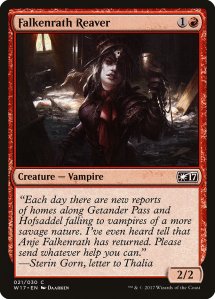 Whenever you have a selection of options in games, it can be tempting to simply judge them on something simple, like their base output or efficiency. However, it is important to remember that those elements can be powerful in many different ways. When you are given one of those selections, be sure to take the chance to really think about all the different ways that something can be useful or powerful. You might just surprise yourself! As an optional homework assignment, sit down and choose something you think is strong in a game, and try to figure out exactly why it is strong. Does it have strong base output? Is it extremely efficient? Does it give you more options, or is it hard for your opponent to interact with? I’m sure you’ll learn quite a bit!

A big thank you to my Patrons for this month: Alex, TicTac, and anonymous patrons. If there are specific subjects or concepts you’d like an article written on, I suggest you look at my patreon! For just $7 a month, you’ll be able to suggest article topics for me to write on.

As always, remember that it’s not enough to just hit the books if you want to win. You’ve got to Crit the Books!

View all posts by critthebooks